Up! Catalonia is a complementary model of investment, not speculative and long-term

Most existing investment instruments in startups, invest much money in few projects of few sectors. In addition, these sectors have a high mortality. This leads to a picture of corporate survival radically different from the average. Investors hope that one company can save investment of 9 failed (or more).

But when we open our eyes to other sectors we see the following:

Figures are still very high, but far from the ratios commonly used in risk capital. If instead of investing a lot in few companies, we invest little in many companies and multi-sectoral way, we get a safe investment. If in addition, we invest only in selected companies and accompany the best existing consolidation devices, as well as security we obtain profitability.

If in addition we make these investments in the first possible moment, in addition to support entrepreneurs when they most need it, we enjoy its period of greatest relative growth.

So we build a maximum security and high profitability investment instrument. 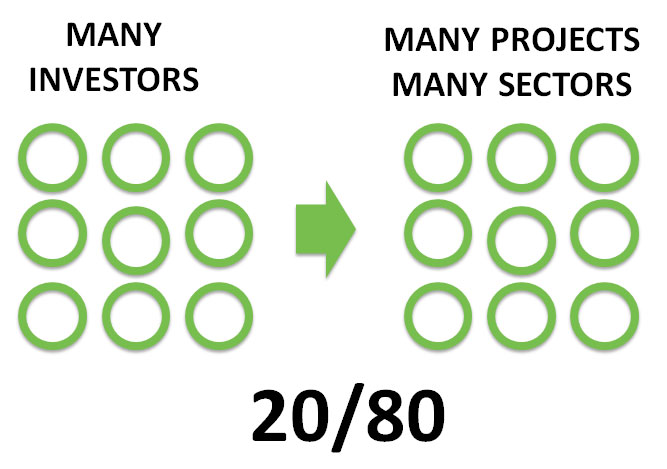 And this is Up! Catalonia: a 360 degrees system where investors get high returns while supporting the productive economy providing an opportunity for large projects born of creative teams and efficient entrepreneurs.

Up! Catalonia: a 360 degrees system where investors get high returns while supporting the productive economy

Up! Catalonia is a complementary model of investment, not speculative and long term. We create large multisectoral conglomerates of entrepreneurs who solve the difficulties faced in the initial stages.

We finance with internationally comparable instruments that mobilize capital asleep today. And we do collaborate, from the hand of the main actors and with the ambition to build a better economy without exclusions.